Best Mild. Sounds so romantic, doesn't it? Not just Mild, but Best Mild. Who wouldn't want the best? 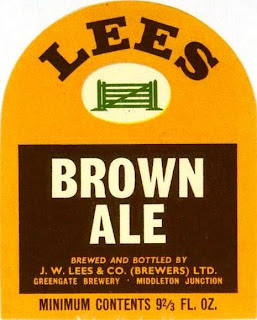 The first reference I've come across to Best Mild is Barclay Perkins XX. This is the beer that appeared in 1931, after a big hike in beer duty. Brewers responded by slashing gravities. Especially of Mild. Barclay Perkins dropped the gravity of their X Ale from 1043 to 1037. But introduced a new beer, XX Ale, at the old X Ale gravity. X was marketed as "Ale", XX as "Best Ale".

WW II saw the gravity of standard Mild drop to 1028. Or the just-about-intoxicating-if-we-attenuate-the-hell-out-of-it level. Postwar, Mild gravities remained at their low wartime level, but some brewers introduced slightly stronger versions. These were sold under the name of Best Mild. Not that they were particularly strong, just 1034 to 1036. Still, better than a 1028 beer.

Lees Best Mild appeared in 1946. It initially had a gravity of 1033 and was party-gyled with K, Lees standard Mild. By 1952, it was being brewed on its own, though in much smaller batches - just 40 barrels, as opposed to 110 barrels of K. By this time there was a significant difference between K and Best Mild: the colour. K was 35 EBC, Best Mild 100. The grists had diverged considerably. K was brewed from pale malt, crystal malt and sugar. The Best Mild grist additionally included brown and black malt.

Before I started looking at actual brewing records, this was the sort of Dark Mild grist I'd expected to find. Ones with dark malts in them, rather than dark sugars. This looks a really tasty beer. Especially for the low gravity. Please brew it and send me a few bottles.

My bullshit is done. Time for Kristen and the detailed recipe . . . . .