You can blame Pivni Filosof for this. Asking questions after my last Austria in 1865 post. He got me thinking. Something that's always dangerous.

A couple of points. The population figures are for slightly later, 1869 to be precise. But close enough to be meaningful.

Despite the text claiming that it was boom time for Austrian brewing, the amount of beer produced per head was quite small. Only Salzburg, Niederösterreich and Oberösterreich look impressive. I'll remark that Salzburg, the are producing relatively the most, had been part of Bavaria for a few years during the Napoleonic Wars. Bohemia and Moravia were well behind, which came as a bit of a surprise. As the reputation of Bohemian beer in particular was on the up.

That'll do for now. But I don't think I've quite finished with these numbers yet.
1 comment:

Guess what I've got for you now? That's right, another example of parti-gyling. How did you guess?

This is also from the 1930's, but from another brewery: Courage. In this example there's a wider range of gravities in the beers and they aren't all of the same style. KKK is a Strong Ale, the other two are Milds.

You'll note that the beer used almost all first wort. Not surprising, as its gravity was only just lower than that of the first wort. 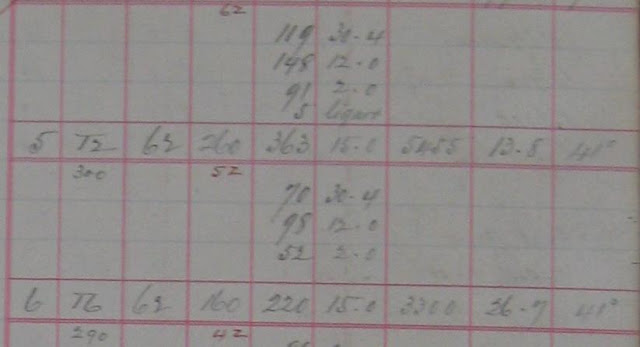 The MC was blended in two separate fermenters, FV 5 and FV 6. The blends were slightly different in their composition, but had the same gravity. 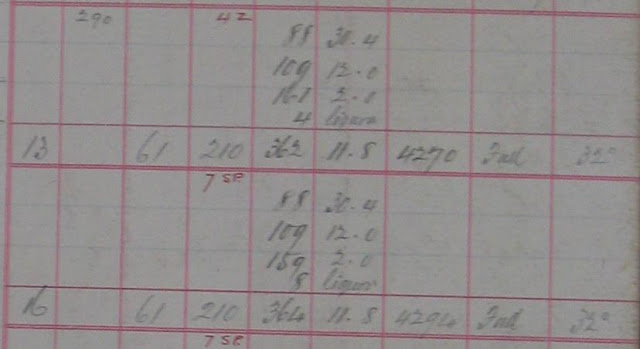 This was also blended in two different fermenters, FV 13 and FV 16. And again the blends were slightly different. 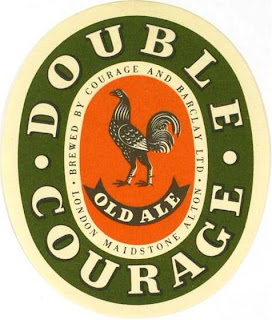 The worts were generated by a typical mashing scheme: mash, underlet and sparge. I would go into it in more detail, but I don't have the space here. (Or rather it would make this post even longer and duller than it already is.)

Someone asked why they bothered with all the trouble of party-gyling. Having to fiddle with different worts and that. But, the way breweries were set up and the way they brewed, it wasn't as awkward as you might think. The first wort was moved to the coppers and already boiling by the time the sparge had begun. Rather than leave the wort lying around until the whole mashing process was complete, which could cause problems later on, boiling started immediately. The second wort would have been drawn off by the time the first wort had been boiled. Often the same copper would be used to boil all three worts in succession. They had a long brew day. For this brew, the mash started at 10 PM and the last wort was drawn off at 8 AM the next morning.

Let me know if you've had enough parti-gyling. I've a couple of thousand more examples I'm just aching to pester you with.
10 comments:

Yes, I've got sidetracked again,. It's supposed to be German month and I keep writing about Austrian beer. Well, they are next door to each other. And they speak the same language.

Just some random statistics. About the number of breweries in the different regions of Austria across the last 150 years. Just the sort of junk that fascinates me. Unlike everyone else.


One remark. The Tirol of today is considerably smaller than that of 1865. Because a big chunk - South Tirol - was given to Italy after WW I. Most of the other regions, or Bundesländer, are, to the best of my knowledge, pretty much unchanged. Except Burgenmland. I think that was part of somewhere else in the 19th century.

Not much has changed over the years, when it comes to the most popular locations for breweries. Except Kärnten has become much less popular. And Niederösterreich more popular.

Razor-sharp analysis there. I've nothing more to add.
No comments:

Hey, hey, hey. As Krusty would say. The party-gyling fun has spread to Let's Brew Wednesday. And when I say fun, I mean mind-numbing tedium. 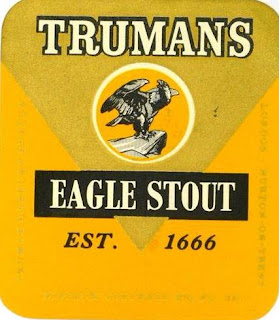 We've a thrice [check that's a real word] of Stouts, all magically spun from the same set of grains. If you've managed to stay conscious throuugh my party-gyling posts you'll have a good idea how Truman did that. Not magic, but still an impressive feat of mathematics. They didn't have claulators back in the 1890's. Even if they had, Truman wouldn't have let their brewers use them. Even in the 1970's their brewers had to perform all their calculations on a slate.

That Truman produced so many Stouts (in addition to these three there was also a Running Stout, Keeping Stout and Double Export Stout) is a sign of  the popularity of such beers. And a testament to the commercial flexibility provided by party-gyling. A glance at any 19th-century brewery price list will confirm just how widespread a technique it was. How else could a small brewery have 15 different products?

I think that's me about done. There are some party-gyle logs singing like sirens. Excuse me while I go and smash into some rocks . . . . .