Just a day late this week. But I think you'll find that today's recipe was worth the wait. An interwar K Ale from Barclay Perkins. Just what I fancy drinking now, if I'm honest. 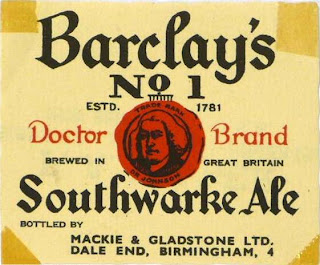 Now on with the new stuff. In the 1920's, Barclay Perkins brewed a variety of Strong Ales. There was draught KK, known to drinkers as Burton. KKK a stronger draught beer. KKKK Winter Brew or Old Burton, a strong seasonal draught beer. And finally the beer we're looking at today, KK bottling sold as No.1 Southwarke Ale, known as Old Ale to drinkers. (As you can see from above, I actually have the right label this time.)

K Ales, as beers, were somewhere between a strong Mild and a Bitter. Dark, but quite heavily hopped. It's hard to think of a modern British beer that's really much like them. Almost forgot the dry-hopping. They were quite heavily dry-hopped, too.