It was very much a minority style, though there was probably at least as much choice of different brands as in Britain today. Though, as I recently posted, lager accounted for about 20% of  Barclay Perkins output. The bigger profit margin Lager offered was beginning to attract the attention of the larger brewers. 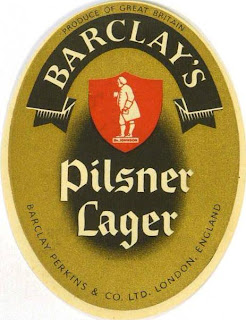 Although more popular on the continent of Europe and in the United States, there are several well-known brands of British lager - Barclay's, Graham's, Red Tower and others. With the return to normal trading, the leading Czech, German, Danish and Dutch lagers are available  in those bars that hold varied stocks. Important differences in brewing practice have already been noted. A fairly high percentage of maize flakes and a more light cured pale ale barley malts are used for light lagers, whilst dark lagers of the Munich type have many qualities of light stouts. The decoction method of mashing and very light hopping with bottom fermentation are the general rule. After the first stages of fermentation the beer is left to mature in 'lagers' or storage tanks for as long as a year. Attenuation is as high as eighty percent.

The treatment results in a beer of subtle flavour, and sometimes of deceptive alcoholic strength. The very light mild flavour is popular with the ladies. Lagers are refrigerated, most carefully filtered and can be served ice-cold without any risk of clouding or hazing.

Strengths vary. Some lagers are weak, others appear to be, their lighter flavour misleading the drinker. An average of four per cent alcohol is common. Some British lagers are rather below the average, some German lagers well above. The famous Danish Carlsberg and Tuborg brands are near the average, and some of the popular Dutch types, Oranjeboom and Heinekens, and the French beers from Alsace are of fair body and flavour."
"The Book Of Beer" by Andrew Campbell, 1956, page 94.


Popular with the ladies. I hadn't realised anyone had ever said that without irony. But I think we can excuse Campbell this one piece of condescension.

It just so happens that I have details of pretty much every Lager Campbell mentions: