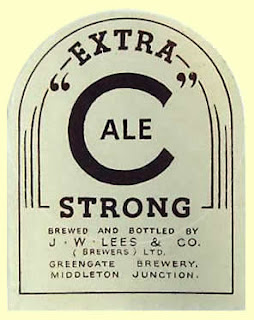 What a rare treat this is. It seems like only yesterday we were speculating about what a "C" Ale might have been like. And now here's a recipe. Cool or what?

I'm still none the wiser as to what the C might stand for. But I do t least have a pretty good idea of what the beer itself was like. Dark, moderately strong, medium hopping. Sounds like a variation on the Burton/weaker Old Ale theme.

Here's a quote from page 12 of "Manchester Breweries of Times Gone By, Vol 2":

"The brewery's [Openshaw] included best mild and bitter, Grade A pale ale, Openshaw Stout and also a "C" Ale. "C" Ale seems to have been a local brew, the origin of which is uncertain. Groves and Whitnall of Salford became well known for their version of "C" Ale in the 1890s; it was discontinued during the last war but reintroduced in 1950. John Henry Lees of Moss Side also brewed a "C" Ale, as did Wilsons Brewery."