It's back! Finally another installment of Let's Brew. And even on a Wednesday. Plus the recipe is for the legendary Fullers Old Burton Extra. This is indeed a special day. 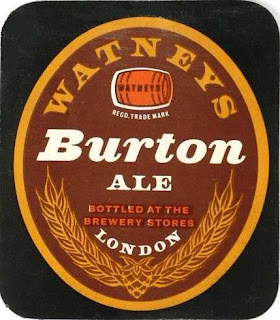 Old Burton Extra was a souped-up Burton, sold on draught. It was party-gyled along with their normal Burton, BO, and their Mild. It looks very similar to what some other London brewers called KKK. You do know what a Burton was, don't you? Forgotten already. I don't know.

Burton was one of the standard draught beers in London pubs for the first half of the 20th century. The last survivor is Young's Winter Warmer. They were usually given K-designations inside breweries. They were a development of the pale K Ales brewed in the 19th century. Along with Mild, they darkened at the end of the 1800's. In the 1930's, a typical Burton was around 1048 -1055º, quite heavily hopped at 1.5 to 2 pounds per barrel and dark brown in colour.

It's a shame none of the London brewers currently makes one. I'd drink it.

Brew this beer. Sip it thinking of the Tower of London, Westminster Abbey, Pearly Kings, pease pudding and saveloys.