A nip in the air calls for

By the end of 1949 few genuinely strong beers were starteing to escape from breweries. Some were even confident enough of their ability to supply such beers that they advertised them. Like Friary, with their Audit Ale.

Audit Ales were extremely strong beers originally brewed once a year for colleges at Oxford and Cambridge. After they closed down their own brewhouses, the colleges contracted the brewing out to commercial brewers.

I'm not sure that Friary's Audit Ale has any connection with either university and genuine Audit Ales. Other than it being pretty strong. 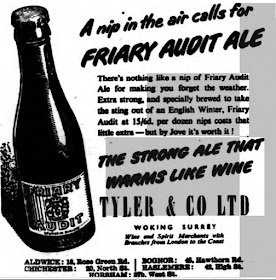 "A nip in the air calls for FRIARY AUDIT ALE
There's nothing like a nip of Friary Audit Ale for making you forget the weather. Extra strong, and specially brewed to take the sting out of an English Winter, Friary Audit at 15/6d. per dozen nips coats that little extra — but by Jove it’s worth it!
THE STRONG ALE THAT WARMS LIKE WINE
TYLER & CO LTD
WOKING SURREY"
Chichester Observer - Saturday 03 December 1949, page 7.


And exactly how strong was extra strong? Around 8% ABV is the answer. So genuinely pretty strong. Here are the details of it and some other beers of the period, inlcuding several Audit Ales.

Not that the Friary beer was quite a bit paler than all the other Audit Ales.