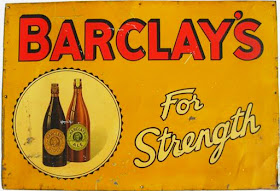 This is the very first brew of GA, something Barclay Perkins would churn out in large quantities in the second half of 1917 and the beginning of 1918. Most batches were between 900 and 1,200 barrels. Meaning it was the bulk of what they brewed. X Ale brews were around 200 barrels, those of XLK, the only Bitter they brewed at this point, were 300-400 barrels.

The rule changes had an immediate impact at Barclay Perkins. Both X Ale and GA were discontinued and replaced by a new, even weaker Mild: Ale 4d, at 1027º. For the next year this was the only Mild they brewed, until April 1919 when average gravity was increased to 1040º and Barclay’s brought back X Ale (at a gravity of 1036º) . Though they continued to brew Ale 4d at the lower gravity. Amazingly, it survived right through to the next war, only being discontinued in 1941.

There’s not much really to say about GA. It’s literally a scaled down version of X Ale, having been parti-gyled with it. All the same ingredients, just slightly smaller quantities. In many ways, WW I saw the birth of modern Mild. Beers of just 3 and a bit percentage ABV and reasonably dark in colour.

Now I’ve told you all about Ale 4d, guess what recipe will come next? That’s right, a lovely watery Mild.