From older ones. It's really striking. And I'm surprised no-one else has mentioned it.

Or maybe it's just obvious to me. Because of my odd background.

I've spent many hours poring over Barnard's "Noted Breweries of Great Britain and Ireland", paying particular attention to the brewing kit he describes. Why? Because he visited many of the breweries whose brewing records I have. It provides context for the numbers. 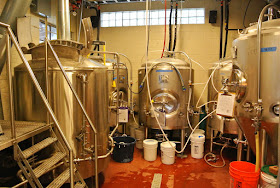 You may have noticed that I've travelled a bit recently. And dropped by a stackload of breweries. Not just that, I'm a nosy bastard. And interested in - frankly pretty dull stuff - like the size and configuration of brewing kit. There are some advantages to being a sad, sad, obsessive.

A classic tower brewery and a modern one are configured in a totally different way. It's all to do with the relationship between the size of the mash tun and the fermenters. Old breweries had a mash tun with a capacity way larger than their fermenters. One mash was distributed over dozens of fermenting vessels. New breweries have a brewing kit with the same capacity as a fermenter at best. More common is to have fermenters double the size of the brew length. It's a huge change.

Mind, if these youngsters parti-gyled they wouldn't have to piss around this way.

Why is this? In the old days breweries churned out large volumes of just a couple of beers. Modern breweries tend to produce loads and loads of beers, each in realtively small quantities.

A Victorian brewer would find a modern brewhouse totally crazy. As I do. But I'm still living in 1913, at least in my head.