Still no end in sight of this series. God I love the British Newspaper Archive. It's spitting out more material than even I can cope with.

You can see that they've changed the theme of the adverts slightly. Father William is still there as are other characters. But rather than making feeble puns on the word "Younger", he's now toasting them. A good enough excuse for some dodgy doggerel.

There's something else different. The characters displayed. Apart from the policemen, they are a very middle class bunch. The plebs clearly weren't their expected customers. 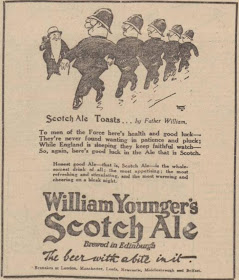 To the men of the Force here's health and good luck -
They're never found wanting of patience or pluck;
While England is sleeping they keep faithful watch -
So, again, here's good luck in Ale that is Scotch.

Honest good Ale - that is, Scotch Ale - is the wholesomest drink of all; the most appetising; the most refreshing and stimulating, and the most warming and cheering on a bleak night."

Some things remain constant, though. The final slogan and many of the claims for Scotch Ale's desirable qualities. Including keeping out the cold in winter. Was picturing the police in such a favourable light an attempt by Younger to ingratiate themselves with the boys in blue? Publicans were certainly well-advised to keep the local constable on good terms. If you wanted them to help break up fights of throw out stroppy drunks. In the late 19th century, even though it was strictly forbidden, London publicans gave the local bobby some small recompense, either in the form of goods or money. 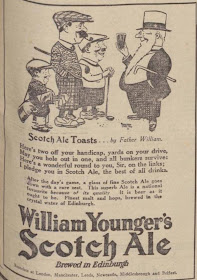 Here's two off your handicap, yards on your drive,
May you hole in one and all bunkers survive:
Here's a wonderful round to you, Sir, on the links;
I pledge you in Scotch Ale, the best of all drinks.

After the day's game, a glass of fine Scotch Ale goes down with a rare zest. This superb Ale is a natural favourite because of its quality. It is beer as it ought to be. Finest malt and hops, brewed in the crystal water of Edinburgh."

They're definitely moving upmarket here. Golf was almost exclusively played by the better off in England. And they're back to a slight vagueness about the ingredients. Yes, we all know beer contains malt and hops. What else, though? A load of corn grits. Funny how they never get a mention in the ads. "Brewed from the finest malt, hops and grits." just doesn't have the same ring to it. 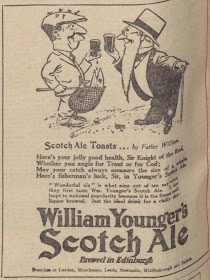 Here's your jolly good health, Sir Knight of the Rod,
Whether you angle for Trout or for Cod;
May your catch always measure the size of a whale,
Here's fisherman's luck, Sir, in Younger's Scotch Ale.

"wonderful ale" is what nine out of ten say when they first taste Wm. Younger's Scotch Ale. It has leapt to national popularity because it is the finest malt liquor brewed. Just the ideal drink for a chilly day."

There's an interesting claim: national popularity. I can't help thinking that's a slight exaggeration. From the list of depots, they certainly had London and the main major northern cities covered. But what Wales and the Southwest? No mention of them.