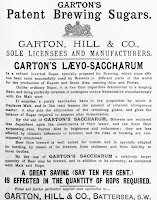 Once you hit the 20th century, there's one problem with brewing logs. All the bloody proprietary sugars. Things either with exotic-sounding names like laevuline or prosaic permutations of letters, like DCS. Or even worse, enigmatic names, like Hay's "M".

Where am I mentioning this now? In preparation for the coming series of posts on Lees post-WW II beers. They were big sugar fans. Some of their beers contained as many as half a dozen.

In some cases, sugars make up such a high percentage of the grist, that just substituting table sugar for them really isn't going to work. Because, in addition to providing fermentable material, the sugars also had other functions. like colouring.

So (courtesy of Kristen) is your cut out and keep guide to proprietary brewing sugars:

Well, some brewing sugars. There's also Laevuline, a priming sugar. A very common priming sugar. SP, too. That's another sort of priming. Any help with what these - and Hay's "M" -  were would be much appreciated.